If you are a regular reader of Hex Mum Plus 1, you will know that Asa and I very rarely watch television and prefer to settle down once the children are asleep and watch a good film, so when we were asked if we would like to Escape The January Blues and watch some fabulous films that will transport us away from this dreary cold January, we of course said YES! 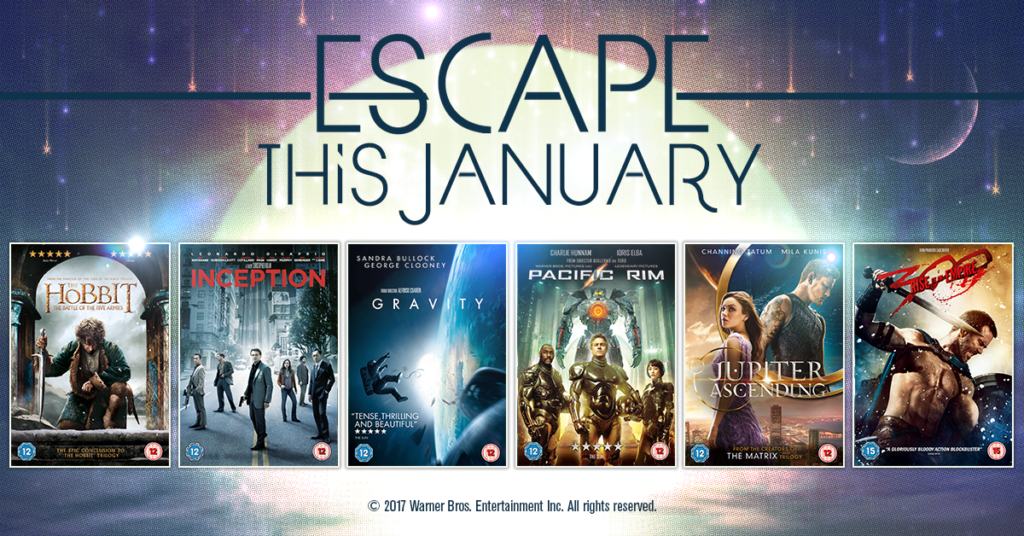 The Hobbit – The Battle of The Five Armies – THORIN OAKENSHIELD AND THE DWARVES OF EREBOR have reclaimed the vast wealth of their homeland, but now face the consequences of having unleashed the terrifying Dragon Smaug upon Lake-town. Meanwhile, Sauron, the Dark Lord, has sent forth legions of Orcs to attack the Lonely Mountain, and Bilbo Baggins finds himself fighting for his life as five great armies go to war. As darkness converges, the races of Dwarves, Elves and Men must decide – unite or be destroyed.
Inception – Acclaimed filmmaker Christopher Nolan directs an international cast in this sci-fi actioner that travels around the globe and into the world of dreams. Dom Cobb (Leonardo DiCaprio) is the best there is at extraction: stealing valuable secrets inside the subconscious during the mind’s vulnerable dream state. His skill has made him a coveted player in industrial espionage but also has made him a fugitive and cost him dearly. Now he may get a second chance if he can do the impossible: inception, planting an idea rather than stealing one. If they succeed, Cobb and his team could pull off the perfect crime. But no planning or expertise can prepare them for a dangerous enemy that seems to predict their every move. An enemy only Cobb could have seen coming.
Gravity – Directed by Oscar nominee Alfonso Cuaron, stars Oscar winners Sandra Bullock and George Clooney in a heart-pounding thriller that pulls you into the infinite and unforgiving realm of deep space. Bullock plays Dr. Ryan Stone, a brilliant medical engineer on her first shuttle mission, with veteran astronaut Matt Kowalsky (Clooney). But on a seemingly routine spacewalk, disaster strikes. The shuttle is destroyed, leaving Stone and Kowalsky completely alone.
Pacific Rim – Sci-fi action feature directed and co-written by Guillermo del Toro. Gigantic monsters known as Kaiju rise up from the Pacific Ocean and invade Earth. As they rage war, killing millions in the process, the human race defend their planet with the use of special robots called Jaegers which are controlled neurally by their pilots. However, even these magnificent machines have trouble defeating the Kaiju. With their armed forces dwindling, mankind puts its faith in ex-pilot Raleigh Becket (Charlie Hunnam) and trainee Mako Mori (Rinko Kikuchi). Together they must control an early Jaeger model in one last attempt to save Earth.
Jupiter Ascending – Jupiter Jones was born under a night sky, with signs predicting that she was destined for great things. Now grown, Jupiter dreams of the stars but wakes up to the cold reality of a job cleaning toilets and an endless run of bad breaks. Only when Caine, a genetically engineered ex-military hunter, arrives on Earth to track her down does Jupiter begin to glimpse the fate that has been waiting for her all along – her genetic signature marks her as next in line for an extraordinary inheritance that could alter the balance of the cosmos.
300 Rise of An Empire – Sullivan Stapleton, Rodrigo Santoro and Eva Green star in this action film based on Frank Miller’s graphic novel ‘Xerxes’ and set before, during and after the events of ‘300’ (2006). In 480 BC, Athenian General Themistocles (Stapleton) leads the Greek Army in a war against the invasion of King Xerxes I (Santoro), naval commander Artemisia (Green) and their Persian forces. Themistocles allies with the Spartans but they are still outnumbered by Xerxes’ men. Who will be victorious? The film was co-written by Zack Snyder and Kurt Johnstad and also stars Lena Headey, Jack O’Connell and Hans Matheson.
If these sound like your type of film, you can find them all on Amazon

Movin' On Up: If You Want To Change Your Life, Then Do It