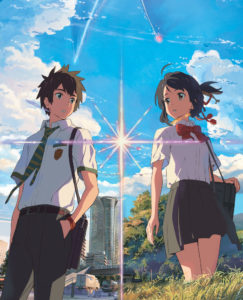 Xene, Neva, Lochlan and I recently went to see the new animated film Your Name. It’s an emotional heart wrenching film about a boy and girl who randomly swapped bodies with each other

The opening of the film went a good steady pace acknowledging all about the girl (Mitsuha Miyamizu) and her lifestyle in a small enclosed town in a rural area as the mayors daughter who performs ancient ceremonies and is in touch with the spiritual beings. The boy on the other hand (Taki Tachibana) The high schooler living in the busy streets of Tokyo, working for a restaurant and being an all round cool guy.

However the first time we see Taki is when it is a day Mitsuha is controlling Taki and Taki is controlling Mitsuha. This created a very comical series of events such as Taki being mocked because he “forgot where his work is” and showing a more feminine side to the girl he crushes on at his work, Where Mitsuha is being generally confused about herself and her surroundings, at first they both think they are dreaming, but slowly the two realise that they’re switching bodies and begin to write down small memos in their phones for the other person to know what occurred on the day when the other person was in control of her body, Taki (when Mitsuha is in control of his body) starts to go on dates with the girl in his work whilst Mitsuha (being controlled by Taki) gets herself a reputation at her school and stands up to anyone who would go against her, both total opposites to normality.

There are some very funny scenes, involving family members and the two main characters, can you imagine suddenly waking up in the body of the opposite sex!

The concept is very different, but works spectacularly well. There are various plot twists and things are not how they originally seem, but if I say too much there will be some spoilers, and no-one wants to read about those!

So if you are looking for a slightly different movie to watch, this is it!

Love anime, check out these 9 Great Anime Films To Watch