As you know I have mentioned a few times (quite a few) that it is about time we thought about redecorating and upgrading some of the rooms in our house.

As much as I would like to tackle the kitchen, it is going to take ages and is smack bang in the middle of the house, so would cause utter chaos.

The other room that really needs changing is our bathroom, I love the size of it, with two sinks and enough room for Eowyn to cartwheel, members of the family have hinted that it is far too big for a bathroom, but I think they are just jealous, I love the fact that I can get the younger boys dried and dressed in the same room without running naked down the corridor soaking wet ( well they still try!)

So I have been thinking about bathroom ideas, firstly I need a bath big enough to fit Asa’s 6ft rugby player frame in without having his feet sticking out of the end, I’m thinking giant corner bath, possibly with a Jacuzzi and I don’t mean the boys and a tin of beans! 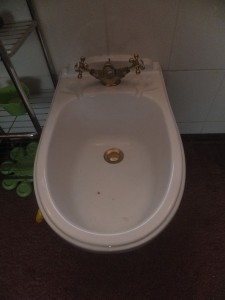 The bidet can go, leaving more room for my large corner bath, a new toilet with one of those fancy self closing lids, I do worry when I hear it slam down and one of the boys is in there…

The part of the bathroom where the sinks are is great, but I would love two sinks that the taps turn on when you run your hands under, this might stop the two monsters trying to flood my bathroom. 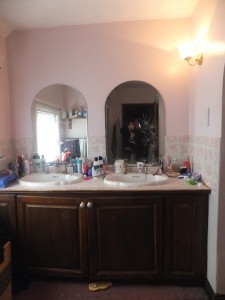 The shower is OK but the older ones tend to use that more than the bath now, so an updated one would be great, as well as heated towel rails, at the moment we have a radiator in the hallway, so you either have to yell for someone to pass you a towel or lose the benefit of the heated towel, because you have taken too long in the shower and it is now cold.

More storage, have you any idea how many toilet rolls this lot go through, therefore buying in bulk would be the sensible option, which means I need somewhere to store it, not to mention the amount of different shampoos, conditioners, dry shampoo, gel, wax they all have, and each person’s different deodorant because they don’t want to smell like their siblings.

Finally the colour, it is currently pink, and I am not a fan, maybe a nice calming blue ?