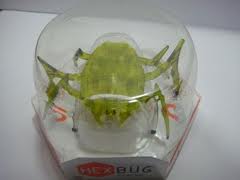 When we received the list of toys that we would be receiving in our first box as a Toys R Us Toyologist, this one made me chuckle!
Everytime the advert comes on the television, all of the children sing together, “Whats that coming over the hill is it a hex bug or a Hex Mum” so they were incredibly excited and noisy when opening….

This little Green bug is very realistic and as soon as I switched it on it was difficult to catch!
The crawling toddler wasn’t too sure to start with and crawled in the opposite direction, the older children, however, thought it was great and began hatching plans to scare their insect phobia nan with the Scarab.
The way that it flips over is fascinating and I am sure the makers had great fun designing this.
We don’t get many REAL bugs in our garden as our 20 chickens kind of keep them to themselves. At the moment our lead cockerel Ginny has been following Asa around the garden, in a stalker style fashion, so he decided to see what Ginny and Co thought of the Scarab, as any type of bug usually gets chased and eaten…

As you can see the big brave Cockerel isn’t so brave now! I think Asa may be swiping this toy to keep in his pocket to deter his stalker.
Overall opinion: The Hex Bug Scarab is very fun to watch for a little while, although it does use batteries very quickly and the level of entertainment is good, but it doesn’t do much else, other than scuttle around the floor and flips back over when you put it on its back, which is pretty cool, but play value is limited.
Although they have yet to test it on Nanny and Grandad in the Hex Mum residence.