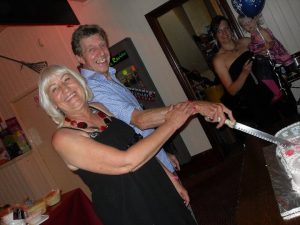 Thirteen years ago, just six weeks after Neva was born, my mum went for a quadruple bypass, it didn’t go according to plan, in fact they lost her on the operating table, thankfully they managed to revive her and she is still here to tell the tale!

At the time the consultant recommended that she stop smoking as it was thickening her arteries so badly that it was putting a huge strain on her entire body, myself and my sister were both advised to keep an eye on thickening arteries as this appeared hereditary, as my mums siblings also have the same, thankfully Karen and I have never smoked and both have strong opinions on the subject!

I would like to say that both our parents listened and did as the doctor told them, but it is addictive and my dad had been smoking since he was a teenager, so old habits die hard (not sure if that is the best saying!). Mum has been suffering for a long time with pain in her legs caused by the lack of blood flow, so when she went for a scan a year ago to check her legs, she wasn’t expecting the news she received, that they had found something on her lung, after tests it was confirmed that it was lung cancer (I think she is taking the entire family’s share of the NHS), thankfully they operated and managed to cut away the cancer as it had been caught so early ( and completely by chance), she had a check up a little while ago and was given the all clear, but that still didn’t solve her leg problem, finally she went in for the operation on her legs, they placed stents within her groin area to allow the blood flow between the legs, in true mum style, the simples operation of the three was the most traumatic, one of the stitches didn’t hold which meant a second trip to theatre and a very long wait for her to come back to recovery, a simple operation that she would be out in two to three days ended up a hospital stay for nearly six weeks.

Yes she has been through the mill, I think we all have extra grey hairs, but the one good thing (there has to be something!) is that both her and my dad have FINALLY realised that they need to do something about their smoking habit, so they are now both Vaping instead of smoking cigarettes, with the view to stopping altogether, but for now I am just happy that they have both started to make a move towards changing their lifestyle for a healthier (and less traumatic) one.

I have made her promise not to have any more operations, at least for a couple of years, until we are sure she is strong enough, three operations is probably enough for one little person ( she is only just 5 foot tall) and I have yet to prove that she has the same amount of lives as a cat.

If you or a family member are thinking about stopping smoking or moving across to e cigarettes, you can find a wealth of information right here, it may seem hard at the beginning, but think of how much healthier you will be and hopefully avoid all of the problems my mum has had.

1 thought on “Time To Give Up Smoking Parents!”