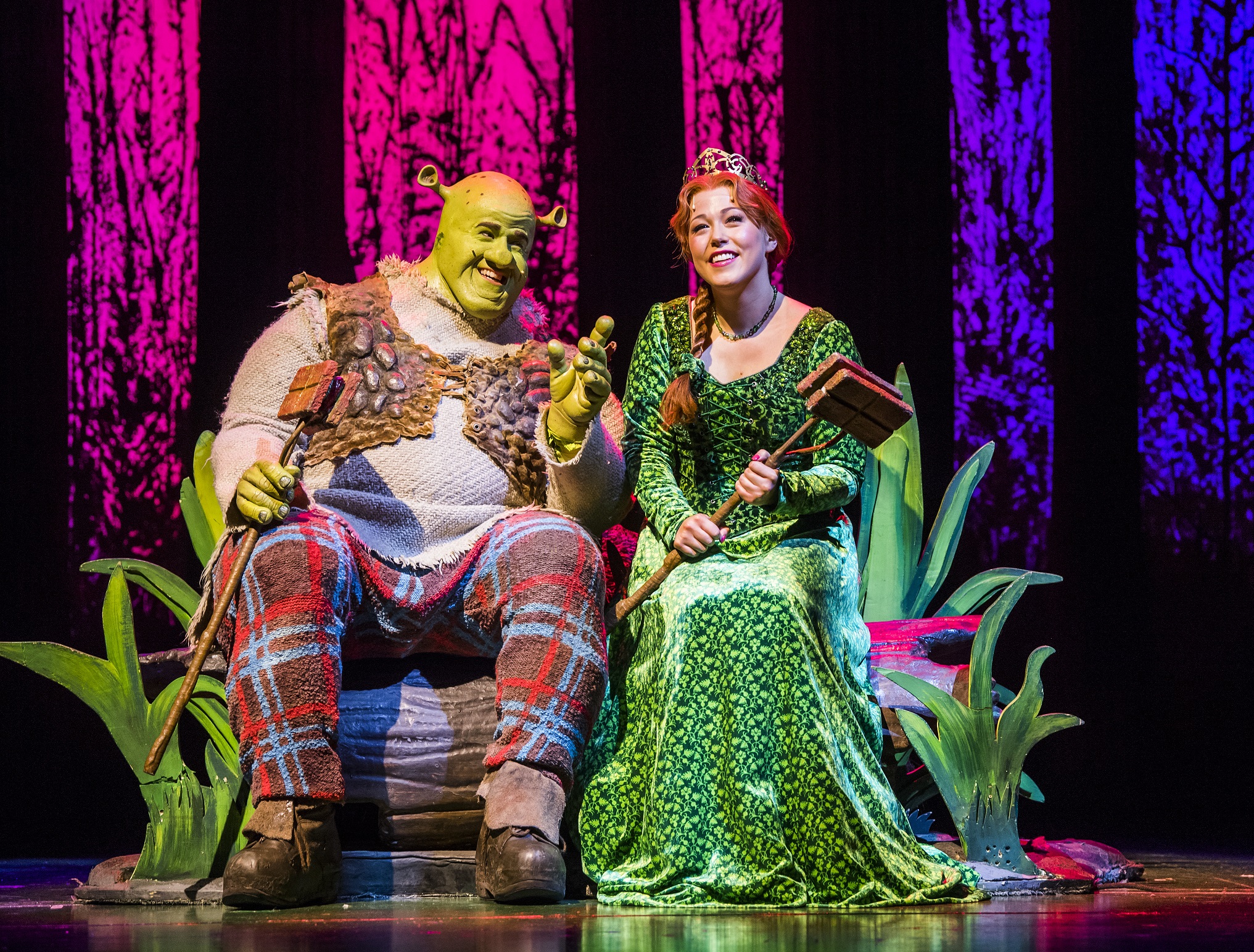 Neva, Xene, Eowyn and I went to Norwich Theatre Royal for the press night of Shrek The Musical, all of the children love the film and we have watched the musical on DVD so we were all excited to see what it was like up close and it certainly didn’t disappoint!

Following a record-breaking UK and Ireland Tour, the smash hit blockbuster is back – and larger than life! Based on the story and characters from the Oscar®-winning DreamWorks Animation film, this hilarious and spectacular production turns the world of fairytales upside down in an all-singing, all-dancing, must-see musical comedy.

From the very beginning of this alternate fairy tale it had you captured, the story of the 7 year old ogre who was sent away by his parents to make his home in a swamp, the set and the video projection was captivating and the music was infectious.

Join Shrek, (Steffan Harri) and his loyal steed Donkey as they set off on a quest to rescue the beautiful Princess Fiona (Amelia Lily) from her tower, guarded by a fire breathing love-sick dragon. Add the vertically challenged Lord Farquaad, a gang of fairytale misfits, and a biscuit with attitude, and you’ve got an irresistible mix of adventure, laughter and romance, guaranteed to delight audiences of all ages!

Every character had a full detailed costume, no matter how long they were on stage. All of the ensemble characters were as fun and cleverly designed as the leads, which created a complete Fairy Tale world which was completely believable.

The dragon and its movement was outstanding, and you almost forgot it was a puppet!

Shrek was brilliant and exactly how you imagine Shrek would be in real life! Amelia Lily as Fiona was amazing, a beautiful voice and her facial expressions were hilarious.

Donkey (Marcus Ayton) was superb and definitely had an Eddie Murphy influence going on, which added to the overall effect, especially as we all loved the films.

The entire cast were magical but my favourite by far was Samuel Holmes as Lord Farquaad, the things that man could do on his knees was fabulous! He had the entire audience in stitches.

The recommended age is 5+ and with the amount of children filling the audience I would say it is perfect for any school age child, especially the burping and the farting.

The soundtrack is brilliant, and check out the super cute gingerbread puppets in the foyer or maybe a set of Shrek ears!

Shrek The Musical is appearing at Norwich Theatre Royal until Sunday 8th July, but if you haven’t got your tickets yet, be quick as they are selling out FAST!