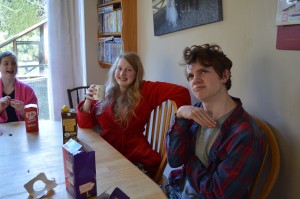 Xene turned 18 at the end of April and at present has decided not to learn to drive, so I guess for now I will keep playing taxi, Lochlan on the other hand cannot wait until he turns 17 and can start lessons, and grab himself some wheels!

All of the children have a trust fund set up by my parents that they will receive at the age of 18, so with this in mind, and knowing Lochlan’s inability to save money, we have been talking about how he plans to purchase a car as he is hopeless at saving!

Lochlan is very keen to go out and find himself a little part-time job, with the aim to save up for a car, but in reality he will probably just spend it on computer games and movies.

The money he receives from his grandparents will be a big help towards a car, (I can still remember my first car, I saved up £325 for a beautiful metallic blue Fiesta Ghia sports, with a sunroof and everything!) but he may need a little extra.

There are many options available to top up the cash that he already has, the bank of mum and dad is his first thought, but with seven children this is not going to be a reality, as much as he wishes!

He could look at an overdraft from the bank, but I always find these sound great to start with and before you know it, you are in the overdraft constantly with little or no hope of getting back into the black and the fees then start to add up.

Asa and I took out a car loan when we were first married, but that was fine as we had a house and a mortgage, therefore we had a good credit rating and we were seen as a safe option, unfortunately students at college aren’t seen in the same way, however there are guarantor loans available, which means that anyone who is a home owner and has a mortgage can go as a guarantor for their children, meaning that they would pay a decent rate of interest, and you would just be a back up, which I am sure most parents would be willing to do, it also means that you are comfortable with the loan, it isn’t some dodgy payday loan with astronomical rates, and it is over a set amount of time.

The final option is for Lochlan to control his spending and to start to actually save some of his money and not let it burn a hole in his pocket, which sounds easy enough, but he REALLY struggles, the pull of putting his wages on Steam so he can buy upgrades for his games is far too easy.

Check back in over the next year to see if Lochlan manages to save enough money to buy himself a car, or if he is sat at the computer wondering where all his money went!

1 thought on “Starting To Think About a set of wheels!”