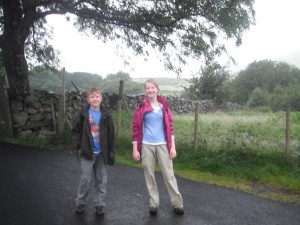 When we go on holiday, we always have to try and juggle activities to do with an age range of 0-16, which is becoming slightly more challenging!
On our holiday to Wales last year, the two eldest announced that they would like to climb Snowdon with dad, we had considered the train a few years before but the weather was bad and we decided against it.
I stayed at the cottage with the smaller children, whilst Xene, lochi and Asa climbed the 1085 metres!!
The three of them were up early (6.30am ,which by our standards is early on a holiday) a big breakfast, lunch packed and a short drive from the holiday cottage to Snowdon.
Xene and Lochlan  happily fell back to sleep in the car, and awoke at Llanberis at the foot of Snowdon. They chose, what they read was the easiest route  using the Llanberis Path , and Xene was actively involved in a little bit of route planning. North Wales on occasion can be bright and Sunny in August, but on the day they chose it was drizzle and thick mist.

The Start of the Climb

They set off with enthusiasm past the Snowdon  mountain railway station and up the path, it had just turned 8am and there was no one else about. The Children bounded with enthusiasm, they left the track and headed onto the footpath to the summit, which was clearly marked.
Perhaps a hidden benefit was the fact the visibility was 40 meters in the fog and as a result, neither of  the children could actually see how far they had to climb! Over the years we have worked out if a child wants to stop, the best thing to do is to stop, they tend to recharge quite quickly, they stopped every 30 – 40 minutes, had a drink, ate, checked the map. Lochlan very proudly carrying an altimeter round his neck, to monitor upward progress. 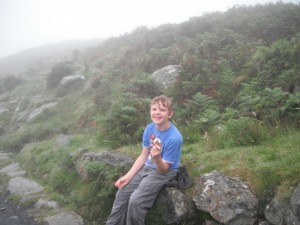 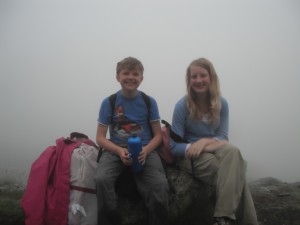 They passed the halfway house cafe, a quaint little rail side building, which on better days I am sure has wonderful views across the valley, the path became more rugged and vegetation a bit sparse. The path was hard going, you really do need a good pair of boots.
It was at this point the first mentions of  “can we go back now” started to occur. They stopped ate, drank, they had climbed 600 meters, and were over half way, Asa dutifully took Lochlan’s backpack. and edged toward the summit, in thick mist, the mountain railway train passed, with the passengers all waving and smiling… 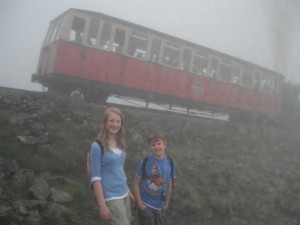 Being overtaken by the mountain train

The path got steeper, they passed 800 meters, but then suddenly it all changed.
At 863 meter precisely Lochlan went into meltdown, “That’s it, You’re Mad Dad, I am not going any further, I am going to die” and sat on a rock in the middle of the path refusing to move.
They satdown, drank, ate and chatted. Xene actually got cross with her brother, as she was desperate to get to the top. Other walkers passed and smiled politely, Lochlan sat steadfast on a rock, still full of a mix of anger and exhaustion  He demanded to be carried on dad’s shoulders, this was not really an option.  Time passed and eventually he agreed to go another ten meters up, Asa pulled Lochlan then they went another ten and stopped, with Asa still pulling Lochlan (which Xene found hilarious), this recharged him until they got to 900 meters (the altimeter was the surprise motivational key on the whole journey) at this point Lochlan had worked out it was 3 steps to the meter, it was not that far, and overtook Asa, whowas struggling to keep up with two teenagers bounding up the path. They reached the base of the summit and climbed the final few steps to the top. 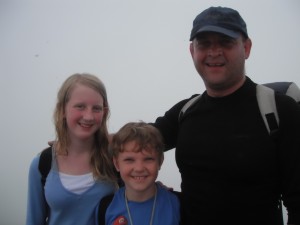 At the Top of the summit,
with a bit of cloud

Both the children were really impressed, but as for the view, Asa could see the children, but not a lot further. Importantly, they both had really achieved something and we were both really proud of them. They sat on the rocks and  had lunch (although Lochlan had half of Asa, having eaten everything he had at our numerous stops up the Mountain). 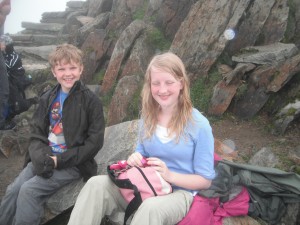 Lunch, or No Lunch,
if you have eaten it all on the way up

After a quick browse in the cafe at the top, they walked around the summit and began to descend.
Both Xene and Lochlan set off at breakneck speed,  as it was now midday they passed several groups, on their way up, the clouds began to break and they could see the stunning views across Snowdonia. The children were both in high spirits laughing and joking. Lochlan counting down the altimeter, somewhat disheartening to the walkers we were passing, going uphill. He also took a great amount of glee returning to the rock he had sat on, during his meltdown at 863 meters 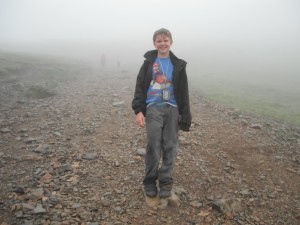 on the way down Lochlan returns
to the 863m meltdown rock, with a smile 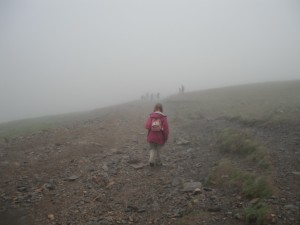 Dad, get up, I want an Ice Cream

They continued the path, it slowly became easier and the sun broke from the clouds, typically as they were nearing the end of the journey 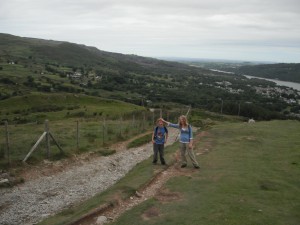 Almost back to Llanberis

On arrival back at around 3pm, both Xene and Lochlan were bursting with stories!

Our next Wales holiday will hopefully include another Snowdon trip, but with a few more walkers, as Neva and Kaide are very keen to go next time, maybe we can all go in the future, if Asa and I don’t get too old.

Wales is one of our favourite holiday destinations, ad is always top of the children’s lists when we ask them where they would like to go.

They are on twitter and facebook and we would definitely recommend as a family friendly holiday.
Tips from the Children
“This post is an entry for the Visit Wales #Wales4Kids Family Holiday Challenge. Wales is the perfect place for a fun-filled family break.” 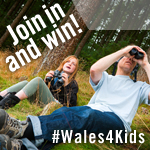