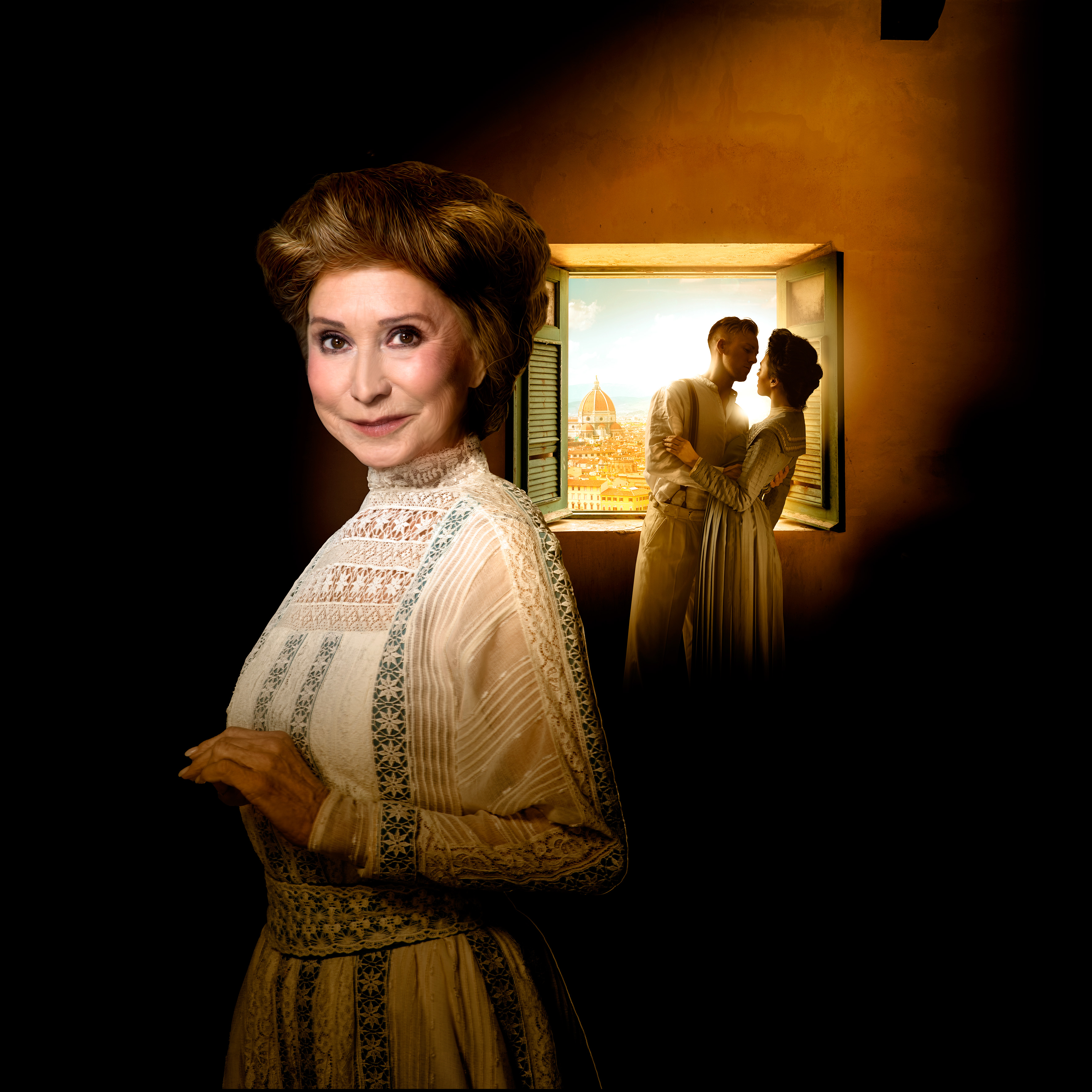 Last night Neva and I attended the opening night of Room with A View at the Theatre Royal Norwich starring Felicity Kendal, along with a wonderful cast, adapted in this instance by Simon Reade and directed by Adrian Noble.

The beginning of the story is set in Florence where a young Lady Lucy Honeychurch (Lauren Coe) is being chaperoned by her cousin Charlotte Bartlett (Felicity Kendal), the opening scene discusses at great length that their rooms do not have a view, enter the Emerson father and son duo who offer to swap rooms with the ladies, which at first they decline as they were not wishing to be obligated to someone of a different type, as Charlotte feared they may be Socialists!

Whilst in Florence Lucy wishes to experience more of life, but gets a little bit more than she bargained for when she witnesses a murder, and then ends up in the arms of the young man George Emerson, cousin Charlotte feels the only choice is for them to both return home to Surrey, England so that Lucy cannot be tempted by this unsuitable young man any further, and they vow never to talk of the encounter ever again.

The first half of the story focuses quite heavily on Lucy and Charlotte and whilst there is no doubt Felicity Kendal is a superb actress and plays the part perfectly, I felt that Lucy was most definitely the stronger character, which should be the case, as we are following her story, the encounters with George Emerson (Tom Morley) were brief, but memorable. Jeff Rawle was perfect as the outspoken Mr Emerson and reminds me of a few people I have met!

The second half of the story is set back in Surrey, where we are introduced to Lucy’s mother (Abigail McKern) and her brother Freddy (Jack Loxton) and the opening scene we see Lucy finally (on the third attempt) accept the marriage proposal of the ghastly Cecil Vyse, (Charlie Anson), but within moments of the acceptance her world is thrown into turmoil with the arrival of two new tenants, a father and son team, by the name of Emerson, who Cecil had met unknowingly at a museum (although George believed it was fate).

A friendship is formed between George and Freddy, and the naked bathing scene seemed to go down very well with the entire audience, although the few lines that were spoken, were drowned out in the laughter!

Needless to say Lucy finally realises that she cannot marry Cecil and would be better off running away to Greece, thankfully cousin Charlotte intervenes and finally Lucy and George are united.

For me the star of the second half was Jack Loxton (Freddy), I found him funny and extremely likeable, and found myself wishing he had been allowed to accompany Lucy on the Florence trip at the beginning, which may have changed the entire course of history!

That said, the entire cast, accompanied by the period costumes and clever scenery projection, created the feeling of an era very alien to the younger audience, but it certainly made you question what had been before and how woman were viewed and treated at the turn of the century. Although Neva aged 13 was probably the youngest member of the audience, she was captured by the story and we both would recommend that you go and see it.

Room With A View is playing at the Norwich  Theatre Royal  until Saturday 12th November, and then moves to Cambridge.