Today I would like to introduce you all to Alice, who writes a very honest and heartwarming blog called Living with A Jude about her beautiful family, that includes her son Jude, but enough from me, over to Alice to let you know a little more…

Mandi very kindly let me have some space on her blog to write about what I write about; I have pondered over what to focus on all day and what I thought you’d all find interesting so I thought I’d go with the positive, funny and amusing rather than the potentially boring and factual.
A bit of background…Jude is 10 years old and has severe learning disabilities; more specifically he has microcephaly, global development delay and (as yet undiagnosed) autism. We’ve been waiting over a year for this diagnosis!
When we’re out and about, to say we attract attention is an understatement. Jude does’t look particularly weird, he doesn’t use a wheelchair or any other mobility aids and can walk fairly typically but he does have some interesting quirks about his demeanour. I’t’s amazing really but after 10 years it still hurts when I see people whisper, laugh and point but as time moves on, I’m slowly becoming incredibly numb to it. I’m just thankful that, as yet, Jude hasn’t really noticed.
Here is Jude at a festival this summer. Can you see the look of “get on with it, mum” about his face?! He doesn’t like having his picture taken much! 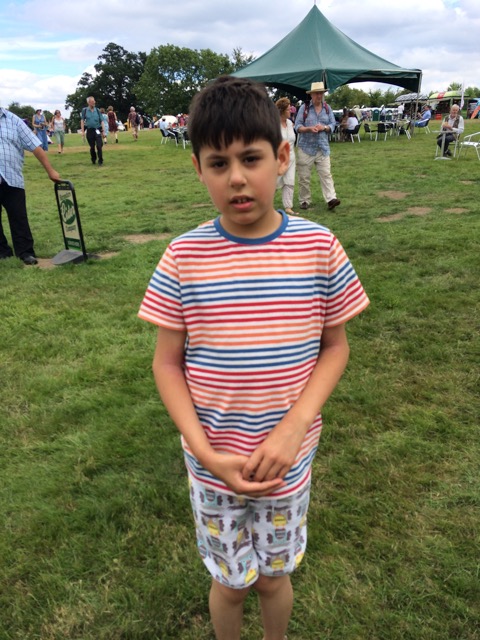 We have had all manner of experiences when out in society. Having a learning disabled child can be incredibly isolating because negativity towards disabled people is massive and can literally scare you into just staying at home. I know people who would rather subject themselves to this isolation than go out to the park with their children because of the potential scenarios they could find themselves in. It’s the unknown. Sometimes you’ll go out and everything is fine, other times it’s total hell.
One of the most negative situations we’ve ever encountered was in the final fortnight of the summer holidays. I wrote about it on my blog and it had an amazing response from people saying how horrified they were (http://livingwithajude.co.uk/disability-issues/bad-bad-bad-day/)  Basically, Jude had a massive tantrum because of wanting an ice cream before going into the park and literally laid on the floor screaming whilst everyone walking by stared at him.
Here he is in all his glory – 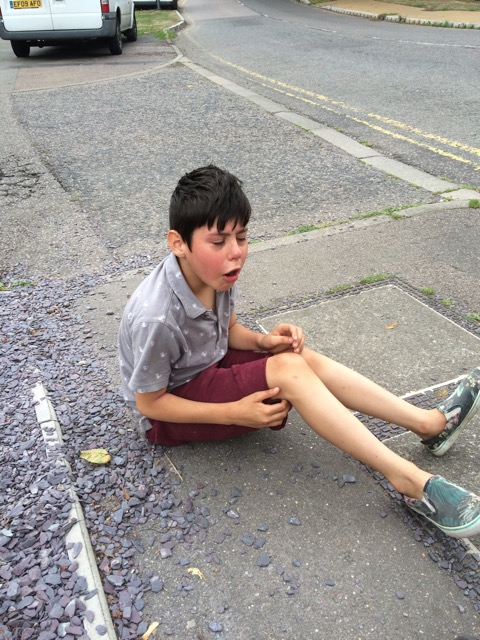 I could have just gone and got him the ice cream however, he was so worked up by this point, he would have just thrown it and had another tantrum anyway. It was a lose-lose situation and I just had to get him to his safe place. BUT, just to make my entire being a little more paranoid and anxious, a group of young teenagers walked by and one girl pointed and laughed. I literally wanted the ground to swallow me up. I had my toddler on the loose, a buggy to push and a 10 year old to try and get on his feet and back walking again. Nightmare. That was a horrible day and I have no idea how I got us all home.
In contrast, we have many people who react positively to Jude and his motormouth habits. If you interact with Jude, the chances are he will ask you his standard list of questions –
“ What are you doing?”
“Where are you going?”
“Is your car hot?”
“What are you having for lunch?”
In an art shop a couple of months ago, I was looking for a gift for my 7 year old daughter to take to a party and I was in such a rush I just had to let Jude meander unsupervised for a few minutes. Literally 20 seconds later, I heard his first question and I wondered to myself which poor sucker he’d pinned down! I hurriedly chose a few things and rushed around the corner to see Jude and a lady, sitting together having a chat. I instinctively apologised and told Jude to stop asking questions but she immediately said that it was fine and continued answering his questions whilst retorting with her own back at him. He was THRILLED and had the biggest smile on his face. It was wonderful because so often people just look at him like he’s nuts and walk away.
Jude’s new indoor swing really helps him chill out. 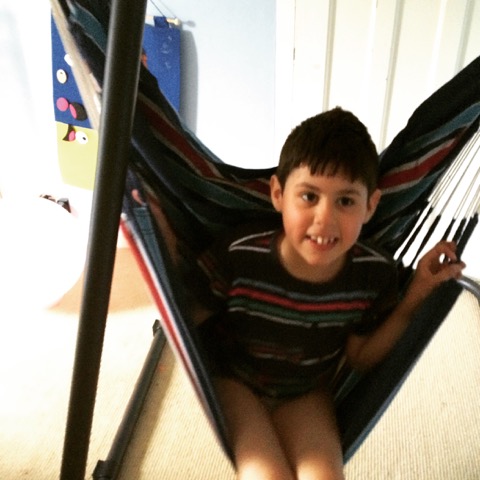 Other things we’ve encountered – once during another explosive tantrum in a supermarket when Jude was about 5, an elderly lady walked up to me and said that perhaps I should just give my son some love and then he’d be happier. Honestly, I could have screamed, I was so stunned someone could be that insulting when they have nothing to do with your family whatsoever. Yes, I was ignoring him but that’s often the best tactic for a tantrumming child, non?
The most amazing occurrence ever happened on a flight to Chicago about 3 years ago. I was dreading it. Jude contained in a metal tube for 8 hours wouldn’t fill anyone with joy! Luckily, my parents had amassed so many air miles we were able to fly upper class and it is probably only because of this I agreed to the voyage with Jude. We boarded the plane and I swiftly downed 2 glasses of champagne to ease the anxiety that was slowly encompassing my body like a disease. Half an hour or so after we could take our seatbelt off and Jude was already doing my head in. An American lady wandered over and started talking to Jude, then inviting him over to where she was sitting claiming she had some toys he might like. Turned out she was an Occupational Therapist who had her bag of goodies with her for her son to play with. This lovely lady enjoyed Jude’s company so much that he sat with her for 4 hours, only returning for a meal and landing!! She was amazing and I really wish now that I could find her to say thank you for making us feel so welcome. It’s very normal to not feel part of society and occasions like this truly gives you a warm feeling inside.
Jude and his sister attempting to stem the wet weather boredom by watching tv and playing iPad games! 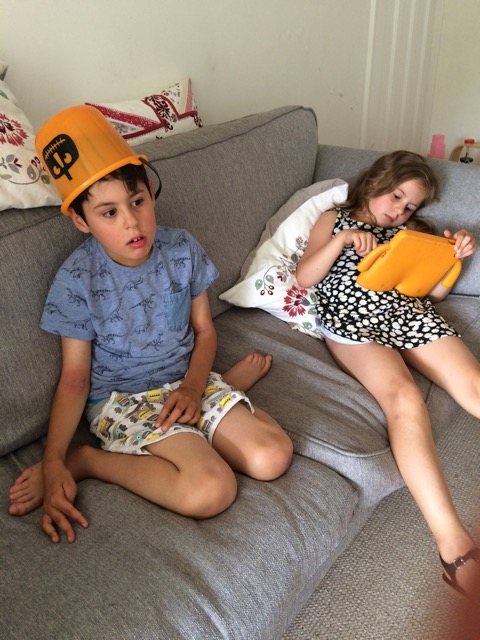 So there we have it, a few contrasting experiences in the life of having a learning disabled child. If you would like to read more about living with a Jude then please follow me at www.livingwithajude.co.uk. I’d love to hear your thoughts. A x
Thankyou Alice for sharing a little piece of your life with us, as a mum of a son recently diagnosed asd, I have encountered a few of these issues myself.
If you would like to follow Alice, Jude, Emmeline, Elsa and Joe on their journey, don’t forget to follow them on facebook, twitter , instagram and youtube

1 thought on “Our Best and Worst! – Living with a Jude”