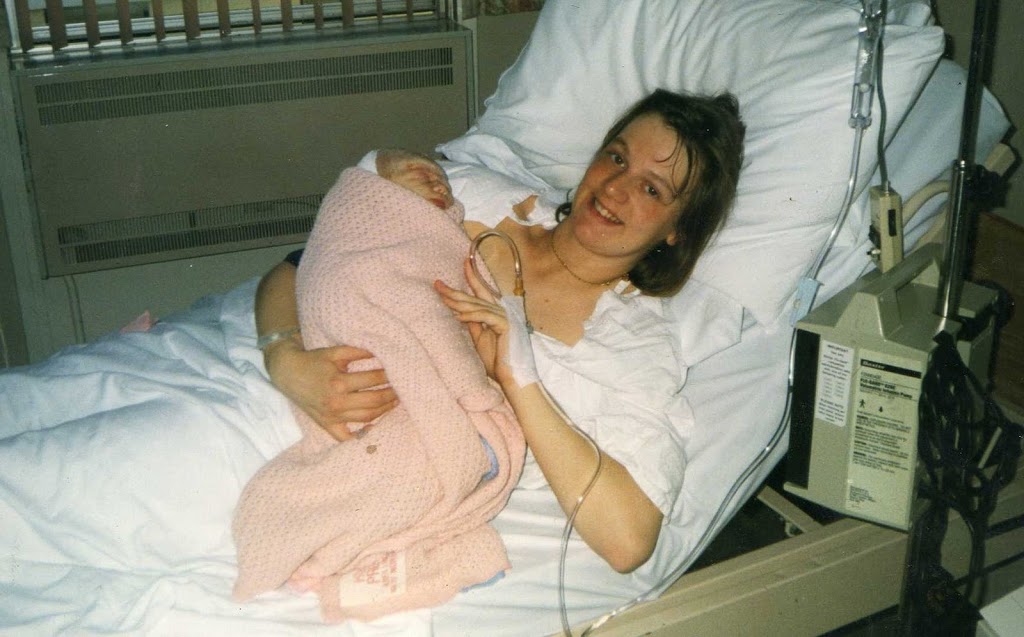 The birth of a baby really is a special time, so I would like to share briefly with you, my six different births.
Our first baby was due 6th May 1998, but on the morning of 28th April at 5am, I woke up feeling dreadful, a stinking headache and feeling dizzy, I rang the hospital who told me to come in and get checked, Asa was very calm at this point. although he didn’t drive, so I took us both off to the hospital, just to get checked out, by 7am I had seen the consultant who had said I was to stay in and be monitored, Asa dutifully phoned everyone to tell them what was happening, no sooner had he done that then the next consultant changed his mind and said my blood pressure was rocketing, and I had begun to get rather puffy looking. So I was to be induced that very day!
I was given my first dose at lunchtime and Asa and I walked around the hospital grounds, I just remember feeling quite chilled and relaxed. As the contractions began to take hold I had an epidural and Asa was with me throughout, giving encouraging words and at 7.49pm our first daughter Xene was born, Asa was amazing throughout and got quite emotional when she was born. 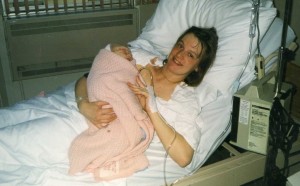 Birth number two wasn’t at all like the first one….Baby number two was due on 23rd April 2000, but due to excruciating pelvis problem, they decided to induce me on 17th April, which wasn’t a problem apart from Asa was booked in that morning to have his nose reset, after breaking it playing rugby two weeks before, but he assured me it would be fine…..

At 8am I took Asa into the hospital, I received a phonecall at 1pm to say he would be ready to leave as soon as he had eaten something, I arrived at the hospital to find him just finishing a Cheese and Tomato sandwich (funny what things stick in your mind!) and reading a  newspaper, he was trying to look so completely alert, the only problem was that his newspaper was upside down!! He really wasn’t with it at all!!
Anyway they let him leave and we returned back to the hospital at 7pm, every person that Asa met, he told them “I’m not drunk, I’ve just had my nose reset!” They sent him home at 10pm saying that nothing would happen until tomorrow….
At 2am I really felt like the contractions were getting quite strong, I called for ther midwife who casually came to check me and was suddenly met with “Call Mr Morrison and get him back up here quickly! ” I was 7cm dilated, they wheeled me round to the delivery suite,.
Asa arrived 20 minutes later, looking like he had been out on the town all night, he needed something to eat and drink and went off in search of the vending machine, he had been gone for what seemed like ages, and in the end the midwife sent a porter to locate him, as I was about to give birth!!
At 3.30am, our son Lochlan was born, Asa throughout the whole day would have made a fantastic You Tube video…. 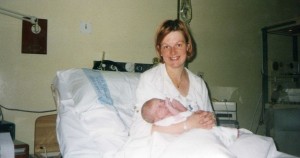 Our third baby was due on 12th April 2003, that day came and went with no sign of a baby making an appearance, the next evening I felt slight contractions, so we called Asa’s parents, who were on standby to come over and stay with the other children. Very quickly the contactions increased, I can vividly remember changing our bedcovers in between contractions, I phoned the delivery suite and told them the contractions were 2 mins long with only 90 seconds breaks, the midwife on the other end of the line said they didn’t sound that strong (they did to me!) but to come in when we were ready.
Asa just knew that it wasn’t going to be very long, I don’t want to recall how quickly my husband drove down the A12 to the hospital, I did feel that we may have the baby right there in the car park, but Asa found a wheelchair and pushed me very speedily to the delivery suite…
When we arrived the midwife on duty asked me to get undressed and get into the bed, it was at this point that I had an incredible urge to push, Asa managed to connect the tube to the Entonox and I had two puffs and Neva was born…. 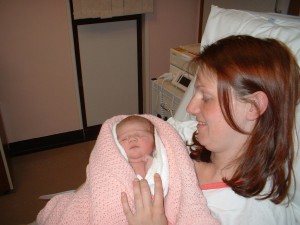 Baby number four was due 10th September 2005, but he obviously didn’t want to share his birthday with his auntie Karen, so he stayed put. Six days later I went to the Grand opening of our childrens new reception class at school, which also involved planting Daffodil bulbs, whilst kneeling on the floor with trowel in hand, I felt the now familiar stirrings of contractions…
The headmistress ushered myself and my children out of school very quickly, and Asa came home from work, this time it was my parents on babysitting duty. We went to the hospital and after a few hours decided to come home as there wasn’t any sign of baby, at 3am I woke up with stronger pains and decided to have a bath, however, on exiting the bath, the contractions were just getting stronger, so my parents came back round to continue babysitting and Asa and I went off to the hospital. After reading many other bith stories, I know that my husband is not the first to fall asleep whilst I was in full blown labour, but a few sharp words, and requests to rub my back soon woke him up. Kaides birth was very memorable because he came out still inside his amniotic sack, which apparently doesn’t happen very often, this resulted in a kind of celebrity status at the hospital and I saw numerous midwives and doctors that had all heard about my son’s arrrival and wanted to witness it for themselves!! (don’t mind me i’m just the woman giving birth…)

Birth number five wasn’t quite so dramatic, due on 3rd December 2008, I finished work on Wed 26th Nov, the following day I felt a large wet patch and was sent off to the hospital to be checked, they were unsure if my full waters had gone or if it was just the hind waters, I was sent back home and told to come in Friday morning at 9am. Asa’s parents turn for the birth babysitting, so I got the older children up ready for school and we waddled off to hospital. When we arrived there were no bed spaces so we toured many different parts of the hospital whlist waiting to be seen. Eventually we were given a room and the contractions took hold, Eowyn was born at 8pm and we returned home six hours later to a very happy family. 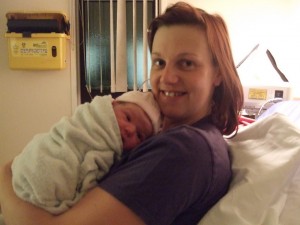 Birth number six was slightly different because I opted for a home birth, the last three births had been straightforward and I hated being away from the other children, waiting at the hospital for the obligatory six hours after the birth. Baby was due on 13th June 2011, however on 10th June at 5am I found myself wide awake and feeling a little uncomfortable. I got up and made myself a drink, I then thought I had better telephone to let the midwife know, I suddenly had visions of her turning up with my kitchen full of dirty dishes, so I proceeded to unstack and stack the dishwasher (funny little things go through your mind!).
Asa suddenly came charging down the stairs, he had turned over and found the bed on my side cold and empty, he said he had visions of me giving birth downstairs alone, I reassured him that he would definitely have been woken if that was the case!
In between contractions I made the four older children’s lunch boxes, and ensured they had everything they needed for the day.
Asa took the children to school with a slightly worried look on his face, and I assured him I would wait until he returned to have the baby!!

Asa came through the door at 9.10am and amused Eowyn and kept popping in to check I was OK, by this point I had two midwives and a student midwidfe, in fact more people than I had ever experienced during my previous labours, it was wonderful and THE best experience ever. Asa was able to come and go, without the need to be at my side throughout, because as he says there isn’t that much the man can do.
My waters broke at 10.07am and Tyrus was born at 10.10am….
It was wonderful being able to be in my own home, surrounded by all my belongings, knowing that everything was available.
Asa says that it was the best birth he had been at, purely because he got to spend so much time with Tyrus when he was born, the entire time that the midwifes were doing my checks and making sure everything was OK, he got to spend the time bonding with Tyrus and being with Eowyn too.
It was amazing to watch all of the other children come home from school and be welcomed by their new baby brother. 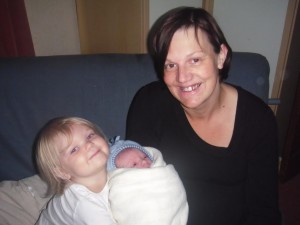 4 thoughts on “One Born Every Minute : Six very different births.”