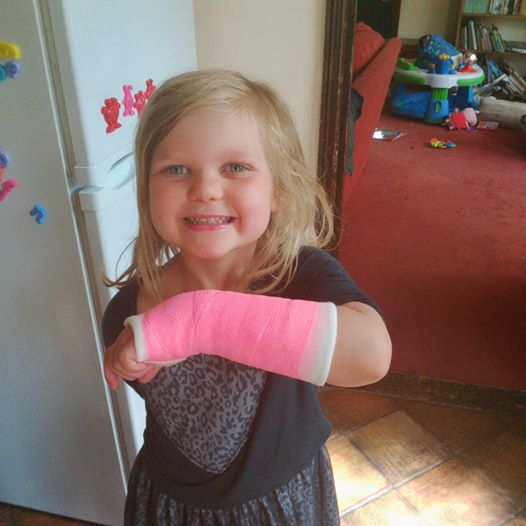 We did it….After sixteen years of having children, we finally have a plaster cast in the family!!

In fact, its really 42 years, as neither Asa nor myself have ever fractured or broken a bone, which is slightly amazing considering the years Asa has played contact sport and I have been hit by a car!!

Two weeks agoI had a phonecall from the Primary school to say Eowyn had hurt her chin and could we go and take a look!!

according to Eowyn, she was doing tricks on the bench, she did it right four times, but on the fifth trick she slipped and split her chin open, so she spent the next few days with a steri stripped chin…

Last weekend she had been invited to a birthday party, it was a lovely sunny day, so off she went. Halfway through the party I received a message that Eowyn had hurt her arm and could we come to collect her.

When asked what she had been doing, she replied ” tricks on the Bouncy Castle and my arm got in the way!!”

She wasn’t too bothered by it, but, by early evening she still wasn’t using her left arm, so daddy took her off to the local A&E department, just to be on the safe side, unfortunately it had been a lovely sunny day, with lots of tourists visiting the seaside, so the A&E was packed…

Three hours later I had a sneaky text from daddy to say they were now going to see the doctor, followed by another text ten minutes later that they were off to X-Ray.

An hour later, I was greeted at the door by … 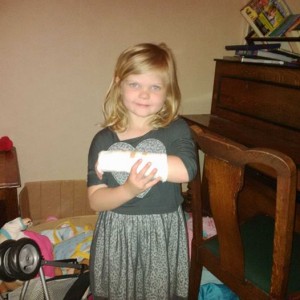 A half cast, with an appointment at the Fracture Clinic on Tuesday! She has a Greenstick fracture, which is when children’s bones bend, but thankfully do not break.

On Tuesday morning Eowyn was discussing whether she would get a plain old white full cast or something different, she wasn’t disappointed!! 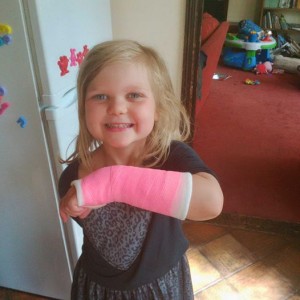 As you can see from the great big grin on her face, she is extremely proud of her Pink Cast!

She will be in plaster for three weeks, although it doesn’t seem to have stopped her doing anything..

Her teacher did have to tell her she couldn’t go and play on the apparatus and had to do some drawing, much to her disgust as she seems to think the cat is like some kind of armour, so she will not get hurt!

I sense that this may not be the last Plaster Cast Eowyn has in her life…..

So, that is our Monday Milestone, our first Plaster Cast in 42 years xx