I am sure you will all know by now that my five eldest children are Marvel, Disney and Harry Potter crazy. This year Neva had a Harry Potter party, Xene and her friends went dressed as Marvel characters for halloween and two days ago Eowyn had a Disney themed birthday party.

When I heard that there was a fab meme all about those three topics, I knew exactly who would answer them! (Although i’m not sure how much the five would agree…)

Although we haven’t been to Florida yet, it is definitely somewhere the children would ALL like to go, I just need to pluck up the courage for such a long flight.

1.Which Hogwarts house would you be sorted into ?

The entire family was split on this one, Xene would be Ravenclaw, Lochi Gryffindor, Neva and Kaide both said Hufflepuff and Eowyn chose Slytherin.

2. Name a Disney character you’d like to have dinner with ?

Xene said she would like to have dinner with Tiana from Princess and The Frog, because she owns a restaurant, so they would be guaranteed good food.

Lochlan said Aladdin, because he hoped the genie would come too and grant him three wishes, or catch a ride on the flying carpet!

Kaide would love to have dinner with Olaf, but they would eat something cold, so that Olaf didn’t melt.

Eowyn would like to go Under The Sea and have dinner with Ariel and all of the mermaids.

3. Which Marvel superhero power would you choose ?

Very different answers to this one, Xene chose phasing, Lochi would like to have mind control, Neva would like to control the elements, Kaide would like to turn into the Hulk and Eowyn would like Ice powers, not quite sure which of those I would be happy for my children to possess…

4. If you could bring back one dinosaur breed from Jurassic Park, which would it be ?

This one was quite tricky, Xene was adamant that her answer was none, she said there’s a reason that Jurassic Park happened! Lochi and Eowyn went with Stegosaurus, Neva chose a Dodo and Kaide said a Triceratops. 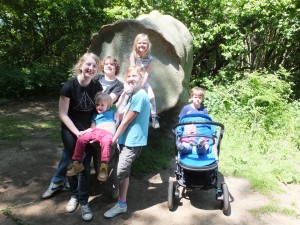 5. You can ride a dragon at the Triwizard Tournament and visit the Owlery at the Wizarding World of Harry Potter, but where else would you go on a school trip to Hogsmeade?

This one was easy, with all five in agreement, they would all like to visit Honeydukes.

6. A scene in any Disney, harry Potter or Marvel movie you wish you could experience ?

Xene would like to experience the Mad Hatters Tea Party, not just because she LOVES tea, but she thinks that the conversations would be very entertaining.

Lochi would love to experience the final fight scene with Ronin in Guardians of The Galaxy.

Neva would like to be part of Dumbledores Army.

Kaide would like to be there when Hulk punches Thor.

Eowyn would like to go Under The Sea with Ariel (again)

7. Name one item from any Harry Potter, Disney  or Marvel movie would you want for Christmas ?

Xene would like an invisibility cloak for Christmas, especially when it is time to tidy her bedroom! Lochi would like Ronin’s infinity stone (not quite sure what he would do with it!) Neva would like a thirteen and a half inch birch wood wand with unicorn hair (she likes to be specific) Kaide would like Iron Man’s blasters, Eowyn would like Ariel’s mermaid tail.

8. Name one unforgettable experience/moment you’ve had at the Orlando Parks. (if you haven’t been just tell us which park you’d like to go to!)

I am tagging the following bloggers to take part in the #FloridaTixTag https://www.floridatix.com/blog/competition-orlando-magic-tag/

Sarah at Boo Roo and Tigger Too

Jen at My Mummys Pennies