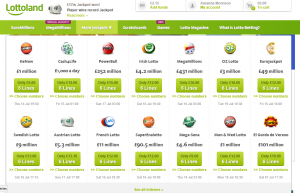 I remember like it was yesterday when the first lottery began, I had stupidly chosen six very memorable numbers for me, so I dutifully put those same six numbers of my lotto slip for many, many years and it took me a long while until I decided that enough was enough and I need to save the money, it was easy at the beginning, I had my one line, which cost £1, then I met Asa and he had his magic six numbers, then when we got to together we added another line of our birthdays/special dates, so we were spending £3 per week, THEN it was twice a week.

The most I ever managed was 4 numbers, which gave me £136, although I did get to meet Boyzone because of the lottery (they did a live lottery broadcast from the leisure centre we worked at and I got to spend time with the boys and their families) so not all bad!

Anyway, when I was asked would I like to review Lottoland I was curious to see what it was all about, I have played a couple of games of online bingo and obviously put my normal lottery numbers online when I was too lazy to go to the local shop!

Lottoland isn’t any ordinary lottery website, it has so much more choice, you aren’t actually purchasing a ticket direct from the lottery, you are purchasing from Lottoland and if the numbers come up, they will pay out, because of this, you have access to lots of different lotteries, including the well known Euro millions and the Irish lottery, but also ones like the American Powerball, which had a 1 billion jackpot earlier in the year and the Oz Lottery.

For the lottery games, it is exactly the same as playing the lottery, in that, you pick your numbers or get them to pick them for you (so you don’t get caught in the trap of HAVING to play each time with the same remembered numbers 22 years later!)

If you are too impatient to play and then wait a couple of days for the results they also have instant scratchcard games that add your winnings direct to your account.

It is very easy to sign up and there are so many different lotteries to join in with, it is easy to navigate and you receive an email with the outcome of your chosen lottery.

If you are looking for a site to play the lottery but would like a lot more choice then Lottoland is definitely one to consider.